Buchanan Well Company, Inc. has been a part of the Osmond Nebraska business scene since the early 1890’s. It has served the farming industry of Northeast Nebraska for its entire 125 years from the same location. 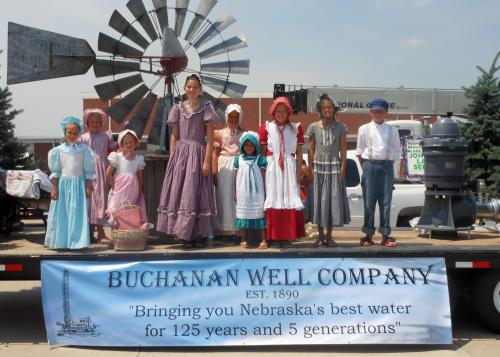 Bert Buchanan was the business founder and became the first of five Buchanan generations to continuously operate the company.  Bert Buchanan passed away in 1918 at which time, his son David (Dave) Buchanan Sr. became the owner/operator of the well business.  Dave’s son, Dave Jr., was the next Buchanan with a passion for water well drilling.  The two worked together expanding the business and helping develop the agricultural scene of Osmond and the area.  Dave Jr. was the victim of a drowning accident in the Missouri River in June of 1960.  From that time, until his grandsons were older, Dave Sr. managed the company along with several dedicated employees.

The fourth generations of Buchanan’s to begin work in the drilling industry were Bruce, Roger and Dennis. The boys began helping their grandpa from a very young age and all continued their careers there into adulthood after various stints in the service. The business became a corporation in 1972 as irrigation was becoming more prevalent in the area.  Dave Sr. enjoyed a very full, active life in the well company until his death in August 1974.  It was at that time that brothers, Bruce, Roger and Dennis became owners.

The irrigation “boom” hit in 1976 with over 200 wells installed that year alone.  Most of these wells were within a 75 mile radius of Osmond, in Northeast Nebraska. The depth of the wells near Osmond ranged anywhere from 50 to 400 feet deep. Bruce Buchanan was killed in May of 1979 in a car-truck accident while returning home from Hastings with a truckload of irrigation pumps. After this devastating loss, Bruce’s wife, Valerie (Clayton) Buchanan became the president of the company. Roger and Dennis continued as managers and drillers until 1981 when they left Buchanan Well Company to start a business of their own.

After the drilling “boom” in the late 1970’s, business slowed due to an abundance of rainfall and poor economy.  The domestic well and repair half of the business remained steady, in part due to increased livestock numbers and the constant and great demand on pumps to the water supply.  The late 1980’s and early 1990’s saw resurgence on the irrigation aspect of the company due to the need to replace 30 and 40 year old wells, in addition to the drought conditions and a more lucrative farm economy.  It was at that time that the fifth generation of Buchanan men began working in the business. David Buchanan III (B.J.) worked as a young man on summer vacations and for a short time after college. 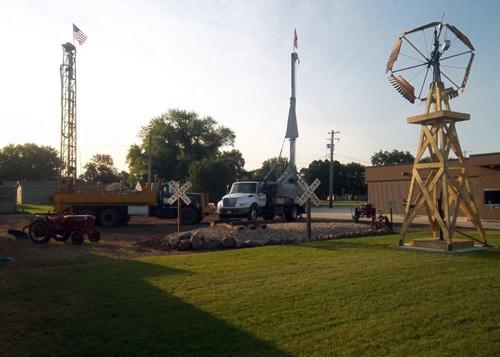 The 1990’s and into 2000’s saw a very steady flow of drilling and service. In late 2000’s, restrictions on irrigated acres came into play from water conservation groups, in part due to hot, dry conditions.  Most of these restrictions continue today.  Toward the end of a very fulfilling career, Valerie Buchanan was killed in an auto accident in November of 2009. Bruce and Val’s children, Margaret, BJ and Robbie then took over ownership of the business and continued uninterrupted drilling service and repair to the Northeast NE area. Several loyal employees helped to bridge the change for this next generation after yet another tragic loss.


In 2013, Robbie (named Roberta after Buchanan Well’s founder, Bert) and her husband, Patrick Gansebom became the sole owners and operators of the family company.  Currently, with very few undeveloped or unirrigated acres in the Northeast Nebraska area, the primary focus of the firm is re-drilling existing wells and maintaining the most efficient pumps possible to supply irrigation and livestock needs. Robbie and Pat, along with all of the employees, look forward to adapting to the changing water industry, continuing the same family trusted values and serving the good people of the Osmond area for many more years to come.